It was a great day! Everyone at the staging area were excited and eager to start. We saw waves A, B, C and D start one after the other but then there was a pause……… not another wave was being released…….. we wondered why???

Then we saw racers who were released coming back!!! What the heck was happening??? Oh no someone screwed up!!! A marshal misled the earlier waves to the wrong trail. That mistake caused the delay of the whole race. The sun was up and oh boy this was going to be a hot and humid race……

That was only the start. During the race, water bottles were flying around the trail causing crashes and delays. Participants were arguing as to who will go first. Marshals were nowhere to be seen specially in the risky parts of the race trail. There was a confusion about the cut-off time. Some thought there was no longer a cut-off time. Other racers scrambled to catch the cut-off time. Wow this was the chaotic part I guess. So much for an orderly race.

This race has been a proving ground. A test of endurance, patience and determination. Many racers did not finish. They gave up but I did not! I armed myself with prayers specially when I informed my wife via SMS that I was not going to complete the 40kms anymore…. but then a force just told me to keep on going….. and I did! When I saw the finish line I took my time. I cooled-off myself. I did not even bother ride the last obstacle. Going down on foot pushing my bike was more difficult hahaha. I should have just rode it!!!

I finished the 40kms route on my first ever 711 Trail Series!!! Yahooo! Thank God!

Congratulations to everyone who joined the race. See you all again on the next race. Keep on riding 🙂 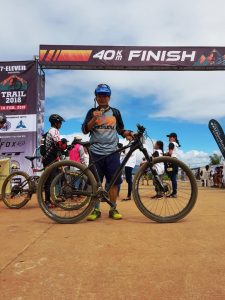