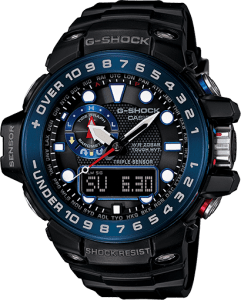 I have been using my Protrek PRG90T for more than 5 years. Brought it with me in rough adventures, in rough weather and in rough conditions ……………… it never failed…………… never!!! Times change and an upgrade was at hand so I had my eyes on another Protrek….. that was until I saw the Gulfmaster. With encouragement from the wife, I purchased the Gulfmaster GWN-1000B (Ocean) 2015 model which is under the Casio G-shock series.

I like G-shocks but not more than Protreks, so I was a bit curious if the Gulfmaster could deliver. The functions are the same with the exception of the atomic time sync. The compass, barometer and altimeter seem to work very well. The Gulfmaster had no titanium wrist band available when I bought it, so I settled for the traditional black resin strap. It feels good on the wrist. The Gulfmaster is light but a bit thick. The 20BAR water resistance is quite a plus specially when swimming. snorkeling or doing some light diving. Another plus is the atomic timekeeping which means no more manual time adjustment if I use it during my trips to other countries (provided that there is a nearby atomic radio tower somewhere).

I noticed lately that it has some scratches on the casing. Don’t know when or where I got those scratches and this proves that my Protrek was more resistant to scratches. I haven’t tried dropping it, but I have confidence with the G-shock tech and tough movement that it will survive a high drop.

Overall I am quite pleased with this G-shock. It’s a great everyday watch and a great adventure watch as well. I would recommend it to friends. Another watch to consider is the Casio G-shock Mudmaster which is more rigid (I guess).

For more information about this watch visit this website.