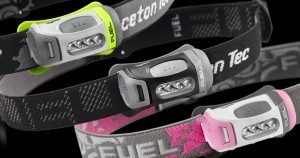 The Princeton Tec Fuel served me well in most of my adventures. 70 lumens is enough to light the way when you need to. It is water resistant and I never had a problem using it during rainy treks and climbs. Battery life is also outstanding (3AAA batteries lasted for 2 nights). I bought my wife one so that she can use it during power failures (during the typhoon season!!!). It served her well also and we were both delighted with it.

I would have given the Princeton Tec Fuel a 5-star rating but I had one problem with it. The plastic casing and lens cracked even if it is stored in its own case when not in use. I did my best to clean it and store it in a safe place but both mine and my wife’s had the same problem, so I concluded that this is a weak point for the Princeton Tec Fuel.  The cover lock was the first to give then the body started to crumble then the lens became foggy…..  but despite that, 2 years of rugged use qualifies it for a 4.5 – star rating. I hope the next iteration of the Fuel has better and more durable plastics, specially the cover lock.